I’ve always preferred special needs pets, whether by nature or nurture. From the time I was born, my parents had a deaf cat, and when Lancelot passed unexpectedly, a blind dog joined our home. Over the years, more special needs pets came to our family: Josie the limping arthritic cat, Roy with damaged vocal chords, and finally Apollo, a beautiful long-haired Turkish Angora with double paws. He had been born deaf, like so many blue-eyed white cats before him. Apollo was found outside at a year-old, and we could only theorize that he was a breeder’s reject before his rescue.

Apollo did not fit in with the animal family as seamlessly as our previous special needs pets. He loved our other cats but was socially awkward – he didn’t believe in personal space and received many scratches over the months it took him to learn feline manners. Apollo startled easily when approached by people, and picking him up could result in injury. At his first annual check-up, we learned that he was terrified of the vet and turned into a “demon” with glowing red eyes and human-like screeching. Dr. Korry joked that she would plan her future vacations around Apollo’s visits.

Adopters often reject a special needs pet like Apollo because the unknowns are scary, and frankly they are afraid there will be a lot more work involved. But the reality is there is an adjustment period with all pets. The key to successfully adopting a special needs pet is to learn and then embrace their special quirks.

Along with Apollo’s disability came a cat who craved physical touch more than any cat we’d had before. He appeared to experience bliss at each brushing session, especially the magic spot high

on his head. Apollo was a nightly fixture on the couch during TV viewing or laptop sessions – he thought nothing of walking across an open keyboard with his giant paws. Apollo was also the only cat who wasn’t afraid to be in the lap of my also deaf, loud-voiced grandfather, who labeled him his “buddy”. And in time, Apollo’s high-volume meow became the “dinner bell” for the other cats, ultimately earning him their loyalty.

There was no warning that, one decade after joining our family, Apollo would be lost at the young age of twelve. One moment, I was teaching him more of what I called “kitty sign language” (he’d picked up a surprising amount over the decade he’d spent with my family). The next, he was rapidly losing weight, and we brought him to the vet to check for hyperthyroidism. It was a shock when Dr. Korry discovered he was riddled with cancer in just the two months since his last check-up. With a high fever and his fluffy fur unable to hide his protruding bones, Apollo was still purring while we petted his magic spot for the last time. We made the difficult choice to end his suffering on June 15th.

The house is quiet without the feline dinner bell sounding, and the tumbleweeds of long white fur no longer need to be vacuumed daily. It was not until our special needs pet was gone did we truly realize all that made him unique. My other pets are a comfort, of course, and helping the cats and dogs at EGAPL dulls the grief.

I’ve recently considered how many special needs pets like Apollo fill shelters across the nation. How many bite when afraid, or are considered too loud, or are rejected for the fear that they will cost more money? How many adopters pass over these hidden gems that will be more loyal, more affectionate, and more grateful than we humans could ever know?

I’m not in a position to adopt another pet, sadly. But I hope that my story might inspire those of you visiting our site because you want to add a new member to your family. EGAPL has a variety of cats and dogs who would love to find a home. We’ve had special needs pets, too, like Hannah the three-legged Hound now happy in her very first home, or Stevie the blind Beagle who loves her new doggie siblings. These happy endings are even more meaningful to us after an animal has had to work harder to find an adopter. Their success stories get us through days like June 15th. 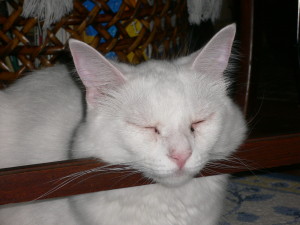 Please consider a pet like Apollo when you make your choice: the deaf, blind, handicapped, diabetic, anxious, or elderly pet – they are desperate for your affection.

And even on that darkest day when you must say goodbye, you will know what an impact you had on one precious life. It is the gift that Apollo gave to

me, and one I would love to share many times over.

A Tribute to Jabba, the 26-lb. Cat Who Went Viral

When Jabba first arrived at North Kingstown Animal Hospital, his story of neglect was apparent…