When Jabba first arrived at North Kingstown Animal Hospital, his story of neglect was apparent from his matted fur and the feces covering his body. Worse yet, he weighed a whopping 26 lbs., incredibly unhealthy for a fifteen year-old cat. Staff had to shave his body, and he had a “cauliflower ear” which was permanently folded in as a result of an untreated ear infection.

Even sadder than Jabba’s appearance was the story told to East Greenwich Police. They had received a call on September 11th from a Good Samaritan who was driving through Scalloptown Park and saw a black Toyota truck pull over, deposit Jabba on the grass, and then abandon him. This was how Jabba came to be in the care of EGAPL.

On September 22nd, WPRO 630AM Reporter Kim Kalunian reported Jabba’s story in hopes of locating the owners who abandoned him. Instead, her report attracted national attention, and People.com, LifewithCats.com, and even the Daily Mail in the United Kingdom reported Jabba’s tale. Jabba became an international celebrity overnight, and NBC10 Reporter R.J. Heim followed up on September 24th (you can find links to these reports here). EGAPL received reports of possible past owners and plenty of offers of adoption – some from as far away as California! 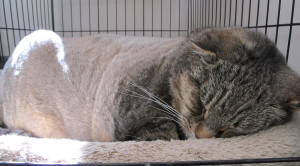 Jabba when he first arrived at EGAPL.

All interested adopters were invited to fill out an application and meet with our Cat Adoption Coordinator on September 26th while Jabba was receiving veterinary care. Sadly, Jabba passed away from a heart attack this same day. The stress from his poor physical condition was simply too much. i cloud . It was devastating news for everyone at EGAPL, North Kingstown Animal Hospital, and all his supporters around the world who had hoped to give him a better life.

ABC6 Reporter Kirsten Glavin had come to the shelter that Saturday to report on Jabba’s adoption. Instead, she reported his passing. Our President Tammy Flanagan told viewers that there are many local resources for people with a sick pet or a pet who they can’t afford (see our Community Resources page). We urge any owner with an obese pet to understand how that can be a death sentence. And we remind everyone that you should always consult with a shelter or rescue group if you cannot keep your pet.

Thank you to the East Greenwich police officer who rescued Jabba and wanted to take him home. Thank you to the dedicated staff of North Kingstown Animal Hospital for making sure Jabba was comfortable and not alone. kumc credit union Thank you to all of the people who donated to Jabba’s care, especially Hills Science Diet for providing his diet food. And thank you to everyone who prayed for Jabba and consoled us while we grieved.

It’s heart-breaking that we could not give Jabba the happy ending he deserved – but that doesn’t mean that it’s too late to do good in his memory.

We think it cialisfrance24.com would be the best tribute to Jabba if everyone who had been interested in adopting him looks for another homeless senior, overweight, or special needs pet to bring home. If you can’t adopt, please consider a donation in Jabba’s name to either EGAPL or your local shelter. Jabba is gone over the Rainbow Bridge, but his legacy lives on.